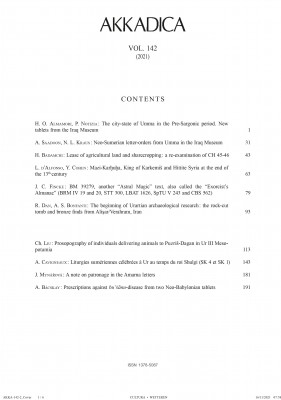 Geogers Dossin (1896-1983), internationally renowned Assyriologist, can be considered to be the father of this scientific discipline in Belgium. A student of Prickartz at the university of Liège, he perfected his knowledge in Paris under the guidance of great Assyriologists such as V. Scheil and F. Thureau-Dangin. The latter invited him as a team member of his excavations in Northern Syria. In 1937 it was A. Parrot who asked him to join the team of the Mari excavations, a task he would continue to fullfil for many years, devoting most of his time to the study and publication of texts from this site. At the same time he taught Assyriology, shaping the next generation, with J.-R. Kupper, A. Finet, L. De Meyer and H. Limet who would develop Ancient Near Eastern studies in several Belgian universities, and in turn, taught the next generation. As a tribute to their Master, Kupper, Finet, De Meyer and D. Homès created the Assyriological Foundation Georges Dossin in 1976.

For the most recent overview of Belgian Assyriology, see K. De Graef, Tintin in Mesopotamia: the story of Belgian Assyriology (1890-2017), in A. Garcia-Ventura and L. Verderame (Eds.), Following the footsteps of our predecessors : glimpses into the historiography of Ancient Near Eastern studies, Eisenbrauns-Penn State University Press, Pennsylvania, 2018 (in press).